Our Southern Friends in Conservation By Todd Bauman

There are many conservation heroes in history, Rachel Carson, Teddy Roosevelt, Rosalie Edge, and Maurice and Irma Broun.  But we still have many conservation heroes today.  And they are all the folks across this great planet of ours that dedicate themselves to spreading the good word about our wildland treasures.  Yes, many for some meager financial asset, and the chance to feel alive in fantastic natural settings.  Most of the meager financial reward is then just for “the season”. Which means, no established roots or home base.  A nomadic lifestyle where home is one’s truck, camper, a “beat up” apartment or cabin on the park grounds, or one’s tent.  Sounds romantic?  It is to a point, but please keep in mind it comes with great sacrifice.  So, hats off to all of these conservation heroes and let me introduce a few that we met on our journey.
Kevin Bowles is the Volunteer Coordinator for Everglades National Park and has been in this position since 2010.  As one can fathom from our SPOT locations it is a large park consisting of 1.5 million acres. It is only Kevin and his seasonal assistant Linda that organizes and manages the 1500 volunteers that pass through the park in a year.  It was Kevin who was my first contact and opened the door for this transcending experience for the HMCC.

The next park hero was permanent ranger Kristy Carmichael.  She discussed our proposed backcountry excursion with me in detail sharing her six intense years of paddling experience within the wilderness waterway.


A big shout out of thanks to fourth season Ranger Daniel Blankenship for being the first contact HMCC had on the opening day bird walk.  He then gave the group a private program on the history and other wildlife of the park.  Third season Ranger Shauna Cotrell and first season Ranger Kristy Johnson provided fantastic information and services to us at the Flamingo office.  D.W. Crouch is a several season volunteer for the park. 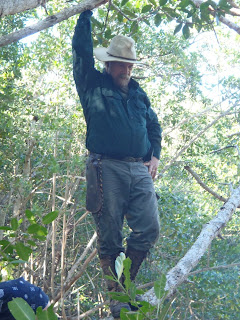 Now the biggest hero for this particular expedition team was “Swamp Ape” founder Tom Rahill.  We spent the opening two and half days with Tom.  His knowledge of this region was extraordinary and his mannerism made him one of the best “field” teachers I have ever met.  He began the Swamp Apes in 2009 as an organized volunteer resource to get large projects done in the park.  There is a focus on recruiting returning veterans from active duty to participate in benefitting this unique wilderness but also to benefit the many individuals giving back to this national treasure.


My hat is off to Tom for his teachings and assistance and as we say in the wild, “Tom, you are welcome at my fire anytime.”
Your friend in Conservation,
Todd Bauman
Posted by Todd Bauman at 2:20 PM